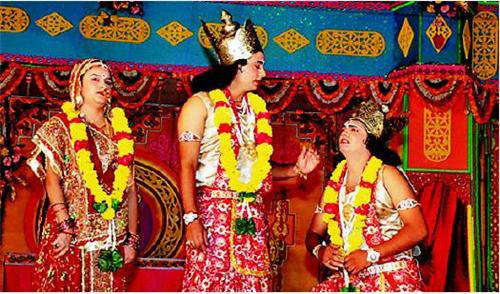 The ethnic and culture-rich holy land of Ayodhya on the banks of Saryu river is very popular for its fairs, melas and cultural activities which is attended by visitors from all part of the nation. These fairs are mainly conducted at the time of festivals.

Ram lila is a popular play in Uttar Pradesh which depicts the life of Lord Rama. In the town of Lord Rama, this play is given much importance and staged during festivals especially during Vijayadashmi and Rama Navami as it also gains much popularity and attention from the devotees. The play was first said to be initiated by saint Tulsidas since the Ramcharitmanas, authored by the saint, form the foundation of Ram Lila stage play performances till date. Professional Ram lila state players group is called as Mandalis and the holy city is very popular for Mandali Ram Lila. The Mandali Ram Lila performers' stages high classic Ram Lila play complimented by folk songs and Kathak dance. 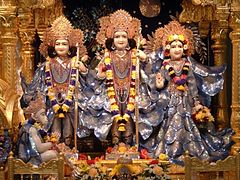 Ram Navami marks the birthday of Lord Rama and the home town prepares for grand fairs and melas as the city is visited by thousands of devotees from all round the world. Ram Navami mela, conducted at Kanak Bhawan, is very popular in Ayodhya. The Kanak Bhawan temple is believed to be the wedding gift of Lord Rama and Sita presented by Sita’s mother. 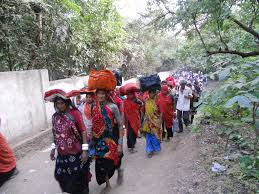 Parikrama means journey surrounding the pathway of shrines and it is very popular in Ayodhya. Parikramas are of different types which vary with the duration of Praikrama travel across shrines. In Ayodhya, Antargrahi Parikrama, Panchkoshi parikrama and Chaturdashkoshi Parikrama are very popular. Devotees on an auspicious day take a holy dip in River Saryu to commence their Parikrama.

Antargrahi Parikrama is the shortest among the three that has to be completed in a day; it starts from Nageshwarnath temple and touches Rama Ghat, Sita Kund, Mani Parbat, Brahma kund and gets completes at Kanak Bhawan temple. The Panchkoshi parikrama is a 10 mile journey connecting the holy Ghats and shrines in Ayodhya. The longest parikrama is the Chaturdashkoshi Parikrama which covers a circular parikrama pathway of about 28 miles and it has to be completed within a day. The Chaturdashkoshi Parikrama is observed only once in a year on Akshainaumi. In all types of Parikrama the devotees pay their honor to all the residing deity in the shrines which are located on the pathway. 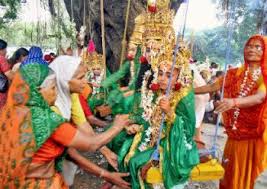 The Sravan Jhula Mela is very popular and playful mela conducted in the holy city and it is observed in the month of Sravan in the second half of the 3rd day of Sravan. On this auspicious day, the idols of Lord Rama, Sita and Lakshman are highly decorated and placed on swings at their residing shrines. Then the idols are also taken to Mani Prabat which is said to be the broken piece of the mountain carried by Lord Hanuman to Lanka. At Mani Parbat huge swings are tied in trees and the idols are placed on it for the playful spiritual act. At last the idols are brought back to their residing shrines. This playful activity lasts the whole month of Sravan.

Comments / Discussion Board - Fairs in Ayodhya